The Anchors of Democracy
A New Division of Powers, Representation, Sense of Limits
Rocco Pezzimenti

Democracy is a fragile apparatus that in history is more of an exception than a constant. When it appeared to have become a universal and shared value, we could engage in identifying democratic systems of varying degrees of virtue, analyse them and examine their differences. Today these systems are increasingly challenged and in a state of crisis because of both external and endogenous factors. The very idea of democracy is called into question and thus the real question becomes: what makes one society more democratic than others? The author concentrates on the heritage of liberal-democratic constitutionalism: the division of powers, representation, the sense of limits of the governors and the governed. The outcome of laws or customs, these are the anchorages of democracies and defend it against being shipwrecked in the hostile lands of authoritarianism or the losing of direction in open sea caused by populist alternatives. These institutions should not be seen as untouchable - they can be changed, naturally, according to the forms and methods envisaged by the constitutions of each country. In essential terms, their state of health reflects that of democratic regimes, as long as they are understood not only as juridical constructions but also as the emanation of the common feeling of the citizenry. With this approach it is possible to assess the parabola of those economic and social realities that at one time constituted the basis for democracy but which today run the risk of becoming parasites that weigh it down more than enabling it to develop. In addition, the political class no longer emerges from a constant and continuous selection but is co-opted on the basis of membership and clientship of a personal kind. All of this, the author argues, 'is an encouragement to analyse the reasons for the weakening of the social bases of parties, and other political and social organisations, and to study new forms of participation. In other words, it leads us to reassess politics as a serious discipline of the humanities'. 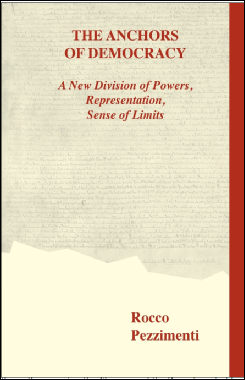