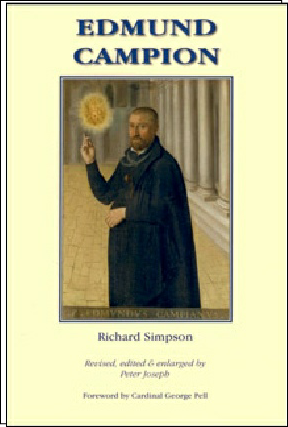 A new and definitive life of Campion. Simpson's classic biography has been thoroughly revised and enlarged by Fr Peter Joseph. With a foreword by Cardinal Pell. St Edmund Campion, born in London in 1540, was an outstanding student and orator from his early years. After schooling at St Paul's, and Christ Church, he entered St John's College, Oxford, where he studied philosophy, theology and the classics. As Master of Rhetoric at Oxford, he became legendary for his eloquence, talents and winning personality. Caught in the middle of the Elizabethan Reformation, he compromised his Catholic faith at University, took the Oath of Supremacy, and was ordained an Anglican deacon. After a change of heart and retreat into Ireland, he spent two years at Dr Allen's seminary at Douay, and then went to Rome to enter the Society of Jesus in 1573. In 1580 he was commissioned by the Jesuit General to minister to the persecuted Catholics in England. He entered England in June 1580 and began a secret ministry, passing from home to home in thirteen counties, via an underground Catholic network. A nationwide man-hunt was begun for him, but he evaded his pursuers and secretly printed his book, Ten Reasons, which caused a sensation. Betrayed by a false Catholic, Campion was captured in July 1581, imprisoned in the Tower of London and tortured on the rack. On 1st December 1581, before an enormous crowd at Tyburn, he was fearless in his martyrdom by hanging, drawing and quartering.