In its familiar translations, the Stabat Mater is a favourite hymn of English-speaking Catholics, But what if these versions are not true to the original Latin?  What did the author really say?  Why did he use a particularly poetic style?  Who was he anyway?

After seven hundred years these and other questions about this much loved hymn remain unresolved. Probable authors include three Popes, three Saints and one layman who, though he was imprisoned and excommunicated by a Pope, is perhaps the most likely.  Jacopone da Todi’s fascinating life story includes the tragic death of his wife, his crazed ramblings in the Umbrian hills, his joining the extreme ascetical faction of the the Franciscan Order,the Spirituali, and his creative work as one of the great Italian poets of the Middle Ages. All this played out against the background of the horrific events of the Black Death, the plague that wiped out millions of Europeans, and the subsequent pogrom that wiped out most of Europe’s Jews.

Desmond Fisher also provides a new translation of the poem, which he sees as more accurate, adhering to the original metre and rhythm, and more genuinely reflecting its emotional mood.  He compares this against four of the most well-known existing English translations.  His own new Stabat Mater is quite different, challenging our preconceptions. 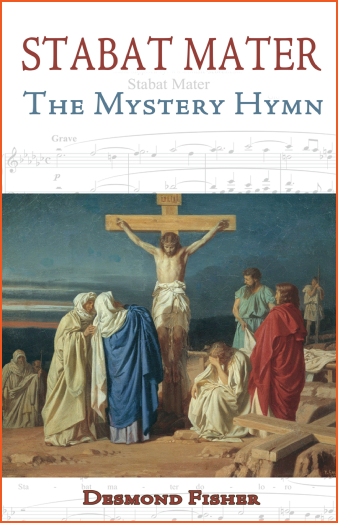