A Journey into the Fullness of Faith

William Gordon Wheeler (1910-1998) was Bishop of Leeds from 1966 until his retirement in 1985. Educated at Manchester Grammar School and Oxford University, he was ordained into the Anglican ministry in 1934. After curacies in Brighton and Chesterfield, he left the Church of England and converted to Catholicism in 1936. He studied in Rome and Upholland for the Catholic priesthood and was ordained by Cardinal Hinsley in 1940.

Wheeler served as a curate in Edmonton, a chaplain of Westminster Cathedral, editor of the Westminster Cathedral Chronicle and chaplain to the Catholic students at London University. His rise within the ranks of the Catholic Church was meteoric. In 1954 he was appointed Administrator of Westminster Cathedral and ten years later, as Coadjutor Bishop of Middlesbrough, he attended the final sessions of the Second Vatican Council and was deeply influenced by the experience. In 1966 he succeeded Bishop George Patrick Dwyer as Bishop of Leeds, where he responded to the twin thrusts of Vatican II – renewal and reunion – and faithfully tried to implement the Council’s Decrees and Constitutions. Never entirely comfortable with some of the more radical effects of Vatican II and seriously disturbed by social legislation which was anathema to Catholic teaching, he sought to manage change with fidelity, understanding and compassion

Many liturgical changes distressed the traditionalist Wheeler but the ecumenical momentum generated by Vatican II thrilled him. This book looks at his management of diocesan liturgical and structural change and also his response to the legal, ethical and social challenges to the Church’s authority and teaching through the 1960s and beyond  ̶  his reaction to Humanae Vitae, the Abortion Act and the defection of priests, his view of national and international events and his attempts to foster ecumenism and develop the Apostolate of the Laity.

James Hagerty relates  Wheeler’s thoughts and actions to the writings of Cardinal John Henry Newman.. In Newman, himself a convert Anglican clergyman, Wheeler perceived a model theologian, a perceptive Church historian and the epitome of the educated Catholic priesthood.

Dr James Hagerty KSG is a former headteacher of St Bede’s Grammar School, Bradford. He is currently an Academic Tutor in Church History at the Maryvale Ecclesiastical Institute, Birmingham.

His two other biographies Cardinal Hinsley: Priest and Patriot and Cardinal John Carmel Heenan: Priest of the People, Prince of the Church  are both also published by Gracewing. 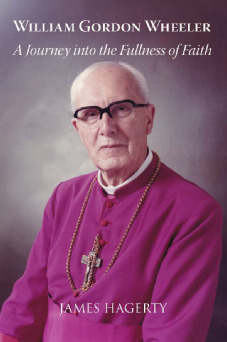