John Henry Newman’s Essays Critical and Historical are articles he originally wrote between 1829 and 1846 and later collected together and republished in 1871. In them Newman deals with some of the key theological

issues of his day. They show both the consistency of his theological principles and the trajectory of their development during the Oxford Movement. The essays are more combative than his title suggests—Newman engages with his subjects with vigour, forensic skill, wit, and even satire. We can also detect the approaching
crisis of his Anglican belief and his conversion to the Catholic Church in 1845. Many of Newman’s insights have turned out to be prophetic about the controversies of 20th and 21st century Christianity.

This is the first critical edition of this work. The Editor has provided an Introduction setting each essay in its

context and giving a critical analysis of it. There are also detailed Editor’s Notes to the text, explaining
the theological, literary and historical references which are often obscure to the modern reader. A comprehensive

Textual Appendix reveals for the first time how radically Newman revised some of the essays for his 1871 edition.

‘Nash’s notes are indispensable. Indeed, his annotations throughout the volume are enviably apt, combining as they do learning, precision, succinctness and wit . . . Nash’s elegant and discriminating edition will serve as a welcome reminder of the Servant of Truth in Newman.’ Catholic World Report 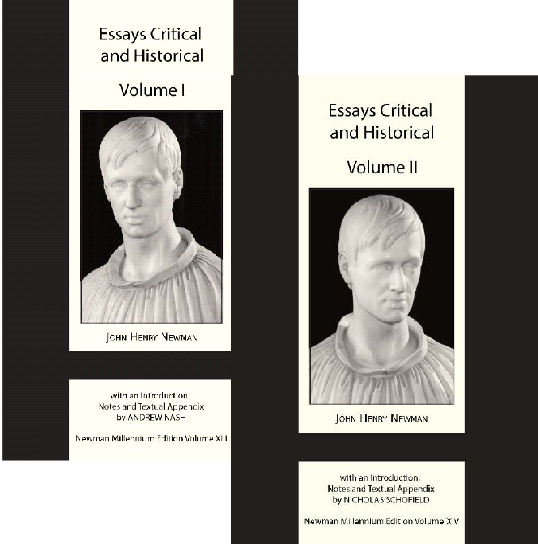 This is the second volume in which John Henry Newman collected together articles which he had written as an Anglican during the Oxford Movement and revised and republished as a Catholic in 1871.

All but one are from the years immediately leading up to his conversion to the Catholic Church in 1845, thus giving a fascinating snapshot of the movement of his mind at this crucial period. The final essay was his first published article as a Catholic in 1846 in which he appeals to other members of the Oxford Movement to recognise where their Catholic theology should lead them – to Rome.

The Editor has provided a detailed Introduction to each Essay, comprehensive footnotes to the text, explaining Newman’s numerous historical and other references, and a Textual Appendix giving all the variants between the original 1840s texts and Newman’s 1871 revisions.