The Abbey of Solesmes, in western France, is famous for its Gregorian chant and the contribution it has made to liturgical renewal, extending its influence far beyond the monastery walls.

This new edition combines the writings of Prosper Guéranger (1805-75), its founding abbot; his second successor, Paul Delatte (1848-1937), and the first abbess of the monastery he founded for women, Cécile Bruyère (1845-1909). The strength, relevance, and often humour, of these great figures will be a revelation to those inclined to suspect nineteenth-century French spirituality of sentimentality. Selections from their unpublished letters, conferences, Scripture commentaries, as well as published works, reveal a spirituality luminous, penetrating, yet eminently practical.

The book presents the story of Solesmes within the framework of the Christian life. Beginning with baptism and the seed of Christ-life within us and ending with death “when Christ our life appears”, the chapters present the unfolding of the gift that is Christian life, prayer, work, suffering.

The connections with England are many and important. Exiled under a hostile republican French government, the monks of Solesmes established a foundation on the Isle of Wight, first at Appuldurcombe House, then at Quarr, where a community still thrives. The nuns eventually settled at Ryde, where a community of the Congregation still exists, and to which the editor of this book belongs. 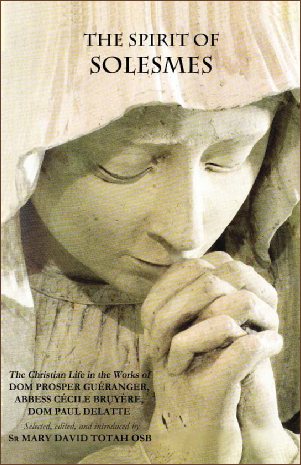