The 25th Day of November the house of Syon was suppressed into the King’s hands, and the ladies and brethren put out, which was the most virtuous house of religion that was in England.

So wrote the chronicler Charles Wriothesley in 1539.  But the story of Syon Abbey did not end with the Dissolution of the Monasteries. Founded by Henry V in 1415, England’s only house of the Bridgettine Order had been one of the richest monasteries of medieval England. Now the community went underground; they returned briefly under Queen Mary, only to leave again with the accession of Elizabeth. They were to spend more that half a century ‘wandering’ - through the Netherlands and France, an exodus that brought them, in 1594, to Lisbon in Portugal.  Here they remained until 1861, when circumstances at last allowed them a return home to England.   They settled in Devon, where the remaining sisters now live in retirement.

The history of Syon Abbey is an inspiring story of faith and fortitude, of an enclosed, contemplative community that found itself living through persecution and martyrdom, wars and revolutions, fire and earthquake, over six centuries of unbroken tradition and unyielding faith.  This book celebrates the sexcentenary of that community in 2015.

E A Jones is Associate Professor of Medieval English Literature and Culture at the University of Exeter and director of the research project ‘The English monastic experience, 15th-21st centuries: Syon at 600’. 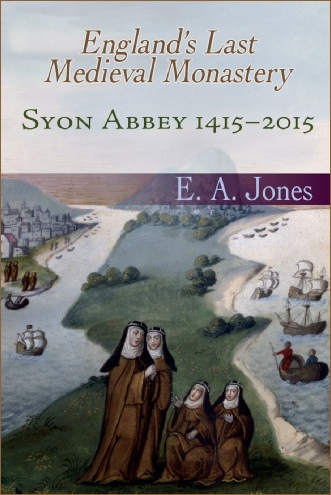