St Mary’s University is a well-known institution playing a major part in the life of Britain and welcoming many students from overseas. Today it sits in its splendid setting at Strawberry Hill alongside the Thames, with its magnificent sports facilities.
What is perhaps less well-known is its history. Its beginnings, in the early years of Queen Victoria’s reign, were at Brook Green, in what was then the semi-rural suburb of Hammersmith. It survived through two world wars and much social change, and in the 21st century enjoyed a part in the Papal visit.
It is in many ways a rather heroic story. The early students were young men, from families who were themselves not at all well-off, who trained as teachers for what were then known as Catholic Poor Schools. They knew they would earn very little money teaching children whose families were desperately poor and often illiterate. Thus were laid the foundations of a network of Catholic schools across the country - a rich inheritance for the generations that followed.
Over the years, and most notably following its move to Twickenham in the 1920’s, St Mary’s flourished and grew. Its expansion to University status in the 21st century has opened a new era.
I trust this book will spark many memories among Simmarians from across the years. It will also help today’s students to understand the story of which they are now part. Above all, I hope this narrative will give us confidence as we look ahead and, with love and gratitude, entrust the future of St Mary’s to God’s good care.

Joanna Bogle is a Catholic journalist and broadcaster and the author of sixteen other books, including Newman’s London: A Pilgrim Handbook, all published by Gracewing 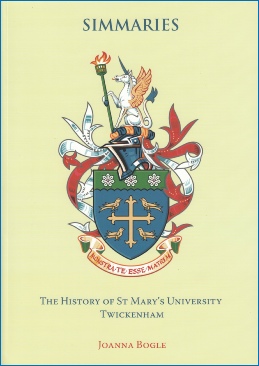