The Sophiology Man
The Work of Vladimir Solov'ëv
Aidan Nichols

This book is an introduction to the personality and thought of the founder of Russian sophiology, the philosophy and theology of ‘wisdom’, Vladimir Sergeevich Solov’ëv. Seen as the single most important philosopher Russia has as yet produced, there has been an explosion of interest in, and writing about, Solov’ëv since the ending of Soviet period constraints in the later 1980s. From the closing years of the twentieth century there has also been an unexpected outbreak of ‘philo-sophiology’ in the West, to which his philosophical endeavours are highly relevant. After an early ‘theosophical’ stage where his interests were concentrated on an ‘integral’ or ‘holistic’ grasp of the true, and a middle ‘theocratic’ period when his mind was concentrated on how to achieve, for Christendom and global society, the common good, Solov’ëv moved into a late ‘theurgical’ phase dominated by such themes as nature, art and love (though the good and the true were not forgotten). These topics could perhaps be summed up as anterooms of the third of the great ‘transcendentals’ of Christian Scholasticism: namely, the beautiful. Solov’ëv did not leave behind a fully coherent body of reflection on the ‘Lady’ Wisdom celebrated in such sapiential books of the Old Testament as Proverbs and the Wisdom of Solomon–the ‘Sophia’ that gives ‘sophiology’ its name–but Aidan Nichols helps to make his sophianic doctrine, drawn from sources that were a mixture of Christian and Jewish, both traditional and esoteric, intelligible to the reader. He also gives an account of Solov’ëv as an early ‘ecumenist’, concerned with the reunion of the Orthodox and Catholic Churches – and indeed with the reunion of Christians all round. At the end of his life, his many-sided intellectual, ecclesiastical, political, moral, and aesthetic enterprise metamorphosed into the belief that only divine intervention, in the form of the Parousia of Christ, will ever resolve the myopia, lethargy, folly and other evils of homo sapiens on this planet. Among those evils he identified one attempted ‘final solution’ – a globalist utopia organized without reference to the incarnate God. It is perhaps his most pertinent word to people today. 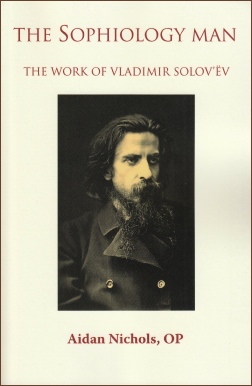