Pope Francis As He Really Is

Preface by the Vatican Secretary of State, Cardinal Parolin

The ambitious objective of Deborah Castellano’s new book, is to offer the reader a portrait of the “Other Francis,” namely, to tell all that has never been said about Pope Francis. Not an easy task, given the impressive amount of volumes dedicated to Francis, which already crowd the shelves of bookstores.

Here 14 major figures in the Church, from the five continents, together with relatives and friends of the Argentine Pontiff share their insights into the real Pope Francis:

Deborah Castellano Lubov is a Vatican & Rome Correspondent for ZENIT, and a contributor to National Catholic Register, UK Catholic Herald, Our Sunday Visitor, Inside the Vatican, and other Catholic news outlets. 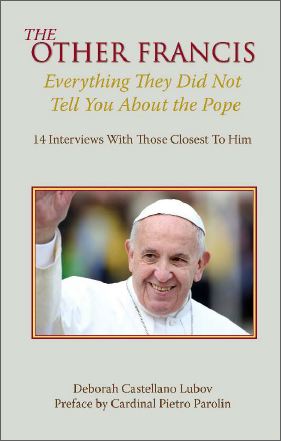