On 3 January 1666, Father Philip Howard, a Catholic priest trained on the Continent, was appointed Grand Almoner to Catherine of Braganza, Charles II’s Catholic queen. Later that same year the Great Fire of London, maliciously attributed to Catholics, reduced much of the City to a smouldering ruin and papists were barred from the capital. The years that followed were not without difficulties for English Catholics, but by the time of the great crisis which ended in the deposition and exile of the Catholic James II the genial former Grand Almoner to James’s sister-in-law had long left England, having been called to Rome and created a cardinal. Subsequently, in 1680, the pope appointed him Cardinal Protector of England, the first Englishman to hold this influential post. Born in 1629 into one of the pre-eminent families of England, the future Cardinal Howard was the great-grandson of the Catholic martyr, St Philip Howard, Earl of Arundel. Brought up as an Anglican, he left England in 1642 for the Continent where he came under Catholic influences, and at the age of 15, and despite the fierce opposition of his family, the young Philip determined to join the Dominican Order, which he did, going on to set in motion the revival of its English province. The restoration of the Stuart monarchy in 1660 had rekindled the hopes of English Catholics, and Howard returned to England to take up a career at court that was to flourish until 1675 when he was he raised to the Sacred College, the first Englishman to be appointed a cardinal since the death of William Allen in 1594. Although based in Rome, as Cardinal Protector of England, Howard was seen by the Holy See as the leading authority on all aspects of the life of the Catholic Church in England, a church ravaged by renewed persecution resulting from the explosive fabrications of the virtuoso liar Titus Oates and his deadly fictitious conspiracy, the ‘Popish Plot’. 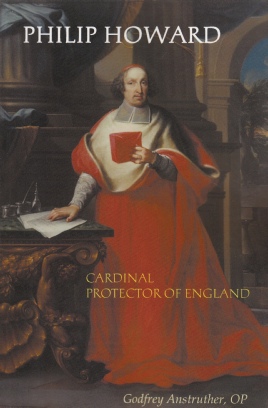