Cardinal John Henry Newman is recognized as one of the foremost intellectual figures of the nineteenth century. A prolific writer, with over forty major works published, he is well known as a theologian, philosopher, educational theorist and poet. His mind, however, was also informed by other arts - music, architecture, sculpture and painting.

In this significant new book, Fr Guy Nicholls, a member of the same Oratory of St Philip Neri in Birmingham that Newman himself founded, examines for the first time in a detailed study the aesthetic that inspired Newman. He looks at Newman’s own musical compositions and the music of great composers that influenced him; at the churches that Newman built, at their furnishing and decoration, and the European and British buildings which he used as points of reference; at painting and landscape that was important to his development.

This book has been commissioned by the Postulator of the Cause of Blessed John Henry Newman, and publication will coincide with his Canonization in the autumn of 2019.

Guy Nicholls is a priest of the Oratory of St Philip Neri in Birmingham, the Oratory founded by Cardinal Newman, and where his relics are kept. He is the Founder and Director of the John Henry Newman Institute of Liturgical Music, and a Lecturer at Oscott College, the Seminary of the Archdiocese of Birmingham. He has previously published on Newman’s Philosophy of Education. 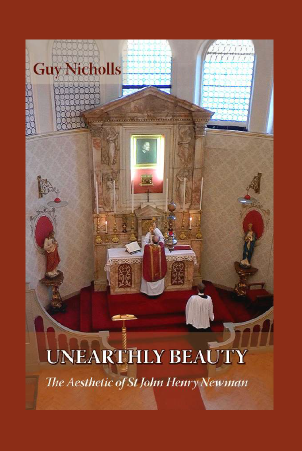